Psalm 29 is one I keep coming back to again and again. It’s all about how when God speaks, stuff happens, and mighty stuff at that. 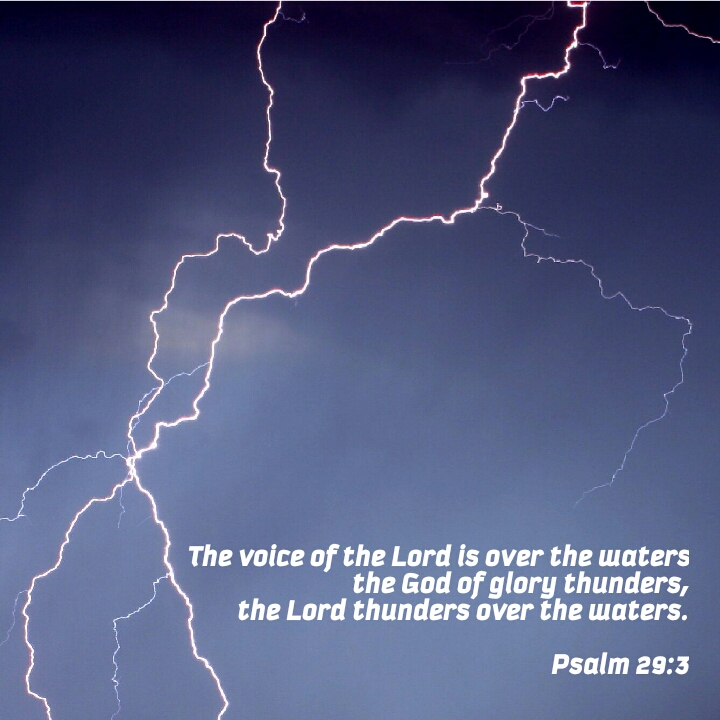 This is powerful stuff!  Whatever authority we feel we have (or don’t have!) when we speak, at work, with our kids, leading our MSC, in our community etc, that really dims in comparison to the authority and power that God’s voice has. God’s voice spoke creation into being!

This encourages me when I think about the difficult or impossible situations I face, and makes me even more desperate to hear the voice of the one who can achieve so much more when He speaks than I ever could. I want to hear the encouragements, promises and challenges from the Lord that will transform my life and the situations I find myself in, to make the wilderness shake, to split, twist and shatter the things that look immovable from my perspective. How about you?

Jesus quotes a verse from Deuteronomy when He is being tempted by the devil in the wilderness: ‘Man does not live on bread alone, but on every word that comes from the mouth of God.’ (Deut 8:3)  He later says that we are His sheep and the sheep know the Shepherd’s voice.  One of the things I most often come back to in my walk with the Lord is a desire to hear Him speaking more clearly. I once heard someone say that it’s not the case that God isn’t speaking to us, it’s a matter of us learning to listen. That’s an important perspective shift.  Jesus’ promise is that we sheep will hear His voice, we don’t need to persuade or plead with Him to speak.  I am trying to get better at ‘tuning in’ to Him.

As we come towards the end of August, lets keep regularly coming back to listening to what the Lord wants to do for us, in us and through us.  His voice is powerful beyond all others and is the voice we need to hear louder than any other voice, so it’s worth stopping to hear Him!  I know in my life when I’ve done that – even just taking 5 minutes in a quiet(ish!) place in the middle of the day – then I’ve seen situations change, sometimes quite remarkably, and it’s so much easier that way than trying to force something by myself.

Let’s be a people who are known for listening to the Lord, hearing Him speak and then acting on it – what a privilege to be able to do that!

If you have any senses of what the Lord is saying to you for Kairos, our MSCs or things we can all be praying into for Harrogate do let us know.

« Talks over the Summer » 9am Sermon – What do you do with the Challenge of Jesus?

By continuing to use the site, you agree to the use of cookies. more information